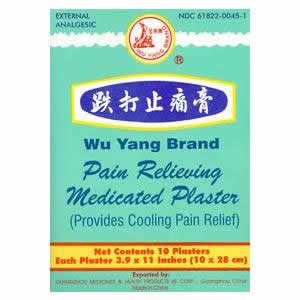 This isn't actually a full-length case study, considering that I didn't really have to do much to fix the problem. Basically, I went to Kenpo study on Monday night and somehow threw out my shoulder. By the time I got home, it was really painful and nearly impossible for me to move my arm behind me and away from my body. I was too lazy to needle myself, so I opted to use an herbal medicated plaster instead.

That first night I used 701 Plaster, which I found in the past to be very useful for pains related to bone structure and joints. I woke up the next morning with it still kind of sore, and proceeded to go about my day at the office. By the end of the day my shoulder hadn't improved much in terms of range of motion or pain sensitivity, so I tried Wu Yang Plaster instead.

I placed a piece of that sticky herbalicious magic on my shoulder directly over the site of pain, and when I woke up this morning it was so much better. I put on a fresh patch after my shower and have continued to wear it all day. Right now I don't feel any shoulder pain at all with normal movement, and only minimally when I try to throw a forceful lock-out punch in the air. Even stretching my arm out and clasping my hands behind my back doesn't produce any pain. Yay!

The interesting thing is that I currently have 5 - count 'em 5! - patients who all have this same type of shoulder pain. They all developed the pain from doing different things, with two of them from doing nothing at all and suspecting it's from sleeping funny. I wonder if shoulder pain can be contagious? All I know is, everyone is going to be prescribed Wu Yang Plaster this week.
Posted by Vien-Phuong Nini Mai at 7:17 PM 1 comment: 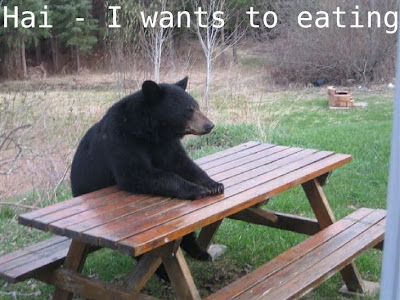 This 2007 article from Chemistry World reminds me why I'm glad to be doing Traditional Chinese Medicine. The key difference between TCM and Western medicine is not in the implements or the ingredients, but in the diagnostic view.

At least 1.1 billion adults and 10 per cent of children around the world are now overweight or obese, according to the International Obesity Task Force. As more people become heavier, they become vulnerable to type 2 diabetes, a potentially fatal condition. Hotamisligil's investigations have uncovered the key pathway that leads to diabetes.

Obesity makes unusual demands on fat cells - they become stressed. When a person piles on the pounds, a cellular organelle called the endoplasmic reticulum (ER) is forced to work harder than usual to process the surplus fat. To cope with the extra workload, the ER normally counts on a built-in pack of chemical chaperones that help process fats and proteins.

But if the ER still feels the strain, it starts faltering, igniting a chain reaction that eventually shuts down insulin pathways and precipitates diabetes. The Harvard team hopes to prevent ER stress by supplying cells with extra chaperones. They tried supplying the ER with tauro ursodeoxycholic acid (TUDCA) and another small molecular drug PBA (4-phenyl butyric acid) as potential chaperones in two sets of obese mice.

The results were pretty spectacular: the compounds alleviated ER stress, and after one week of treatment, glucose levels in both sets of obese mice returned to normal. There was a benign effect on the liver too, reducing the presence of fatty deposits that often lead to cirrhosis.

Seriously?? If you want to reduce the strain on the endoplasmic reticulum, wouldn't losing weight via exercise and dietary regulation be a much better option than taking TUDCA and PBA? As an emergency treatment for someone with advanced type 2 diabetes, this could be very useful. But taking black bear bile and then continuing to lead a sedentary lifestyle and eat excessive amounts of sugar and fatty foods is not a prescription for health.

Personally I hate taking any kind of medicine - I don't like getting acupuncture, I don't like taking bitter herbs, and I don't like eating bland food. I do love to move, and that's my usual medicine - lots and lots of exercise. So I don't understand why people could be content with taking powerful drugs every day for the rest of their lives. To me, it defies comprehension, but I have met people like that - "yeah, I'm sick, I have such-and-such condition, but the doctor gave me a prescription, so now I'm taking Tulupa (hexomethacripulate 600mg)" - and that's the end of the story. Really? So, how long will you be taking that for? "I don't know, the doctor didn't say." EEEEERRRRRRRGGGHHHHHHH!!!! It's just odd to to me. I don't get it. Why do you want to poison yourself like that? Medicine is not benign. There are always side effects - get out your magnifying glass and read the package insert. Chinese herbs tend to have much milder side effects, which is why when I'm sick that's my first option.

Take a look at the whole article here.

How Does Acupuncture Work? New Study May Point The Way 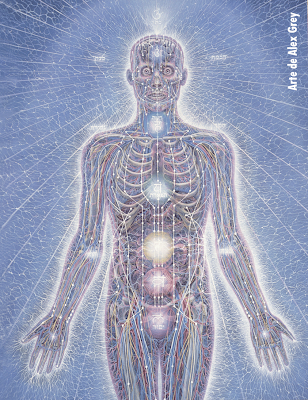 New groundbreaking research shows that the insertion of an acupuncture needle into the skin disrupts the branching point of nerves called C fibres. These C fibres transmit low-grade sensory information over very long distances by using Merkel cells as intermediaries. Dr. Morry Silberstein of the Curtin University of Technology will publish his research in the Journal of Theoretical Biology later this year.

Take a look!
Posted by Jonah Ewell at 8:38 AM No comments: 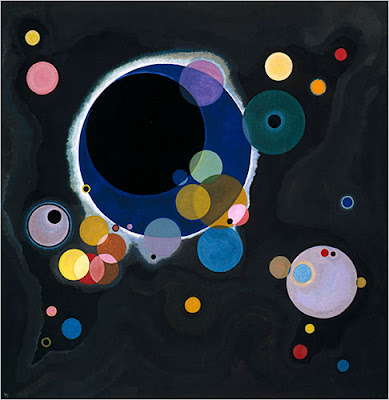 There's a good article on the circle in the NY Times, which uses Vasily Kandinsky as a jumping off point.

This being December, I’d like to honor Kandinsky through his favorite geometry, by celebrating the circle and giving a cheer for the sphere. Life as we know it must be lived in the round, and the natural world abounds in circular objects at every scale we can scan. Let a heavenly body get big enough for gravity to weigh in, and you will have yourself a ball. Stars are giant, usually symmetrical balls of radiant gas, while the definition of both a planet like Jupiter and a plutoid like Pluto is a celestial object orbiting a star that is itself massive enough to be largely round.

On a more down-to-earth level, eyeballs live up to their name by being as round as marbles, and, like Jonathan Swift’s ditty about fleas upon fleas, those soulful orbs are inscribed with circular irises that in turn are pierced by circular pupils. Or think of the curved human breast and its bull’s-eye areola and nipple.

Our eggs and those of many other species are not egg-shaped at all but spherical, and when you see human eggs under a microscope they look like tranquil suns with Kandinsky coronas behind them.

Full article here.
Posted by Jonah Ewell at 8:18 AM No comments: 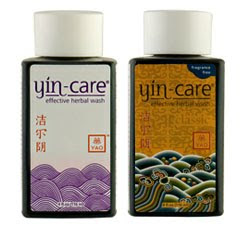 Fat Turtle Herb Company will soon be carrying Yincare, an extremely useful TCM product. Yincare is China’s most widely used topical/intravaginal wash for gynecological as well as general bacterial, fungal and viral skin complaints. The formula is comprised of both the water-extracted and essential oil materials of the herbs listed below and can be quite effective in small concentrations (5-10%). It can be effectively applied as a wash, rub, sitz bath or compress.

Yincare retails for $19.95, with a substantial discount for licensed acupuncturists and students at TCM colleges.
Posted by Jonah Ewell at 7:34 PM No comments: 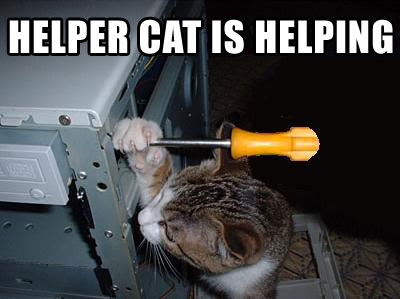 Turns out that we're born with the innate desire to help each other out.
Additionally, giving has a profoundly positive effect on one's health.

Posted by Vien-Phuong Nini Mai at 4:57 PM No comments:

Chinese medicine treats a wide variety of conditions including the common cold, physical pain of any kind, emotional conditions including stress and depression, sleep disorders, infertility, impotence, gynecological issues, sports injuries and many others. Studies and clinical experience have shown that Chinese medicine is an excellent and necessary partner to conventional medicine for serious illnesses such as cancer, HIV and diabetes.

Chinese medicine reminds us that the entire universe is interconnected. No matter who you are and where you live, you are a part of an organic system that has many different parts which must work in harmony. The basic cause of illness and disease is being out of harmony with your environment. Our work is aimed at rebalancing the self so that you can live a long and happy life.

To learn more or make an appointment please visit our websites, ninimai.com and fatturtleherbs.com, or call us at 310-571-8624. 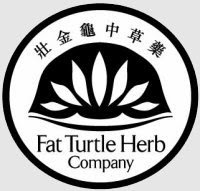 Best Links of the Moment